For Veterans, Service Members, and their Families

Are you a Korean War Veteran in Washington State? 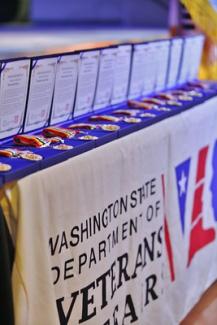 The Ambassador for Peace Medal was first presented to veterans as a special memento for those of who returned to South Korea through the ‘Revisit Program’. The honor has since expanded to veterans who cannot travel long journey to Korea. The Ambassador for Peace Medal and Certificate will be presented to all eligible veterans in attendance as an expression of appreciation from the Korean government to American service men and women.

To be eligible, veterans must have served in country during the Korean War from June 25, 1950 to July 27, 1953. It is also available for the veterans who participated in UN peacekeeping operations until the end of 1955.

For consideration of this medal please submit the following to jenniferm@dva.wa.gov

We are planning a virtual event at the end of the year where recipients of the medal will be announced.