We are proud to announce the appointment of Lonna Leno as the Administrator of the Walla Walla Veterans Home.  Leno assumed responsibility of the Veterans Home on May 18 and relieved Victor Odiakosa, who served as Interim Administrator while Leno participated in an Administrator in Training Program.  Leno completed her AIT and obtained her Washington State Nursing Home Administrator License in April , 2021.

Leno’s professional background in healthcare spans 28 years and includes variety of leadership and other roles in hospitals and skilled nursing facilities. When Leno fully transitioned into skilled nursing and long-term care, she began as a Certified Nursing Assistant, followed by Social Services, marketing and admissions, and finally she became a licensed Nursing Home Administrator in Oregon where she worked for several years.

“We are so pleased that Lonna pursued her Nursing Home Administrator license in Washington State and continues to serve the Walla Walla Veterans Home in this new capacity,” said WDVA Deputy Director David Puente.  “Lonna is deeply committed to this Home, our residents, and the staff who care for them, and we look forward to more positive contributions under her leadership.”

“I value and aim to consistently demonstrate transparency, servant leadership, and inclusivity. One of my goals in team-building is to nurture and grow from the inside out,” said Leno.  “To empower others to not only strive to understand those around them, but to identify and work on their own core strengths - to develop into the best version of themselves. In that light, while holding high standards for professionalism, I am equally passionate about respecting diversity and individuality. It’s an honor having the opportunity to continue Serving Those Who Served alongside the fabulous team at Walla Walla Veterans Home.”

Lonna resides in the Walla Walla Valley and enjoys spending time with family, music composition, travel, photography, martial arts, and the outdoors, and is working toward a Masters in Healthcare Administration. 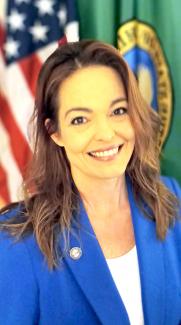