WHEREAS, our nation and its principles have been defended throughout history by brave and patriotic men and women who willingly sacrificed their own well-being for the cause of freedom and democracy; and
WHEREAS, President George Washington created the Badge of Military Merit to honor brave military personnel; and
WHEREAS, in 1932, on the 200th anniversary of George Washington's birth, the Badge of Military Merit was renamed the Order of the Purple Heart; and
WHEREAS, today the Purple Heart is awarded to honor the combat wounded veterans of this country and those who made the ultimate sacrifice and never returned home; and
WHEREAS, the 1991 Washington State Legislature passed Senate Bill 5718 recognizing the seventh day of August as a day to pay tribute to those who hold the distinction of having been awarded the Purple Heart; and
WHEREAS, our veterans have earned profound and eternal gratitude from all of the people of this state for their willingness to risk life and limb for the sake of this nation, its people, and our cherished freedoms;
NOW, THEREFORE, I, Jay Inslee, Governor of the state of Washington, do hereby proclaim August 7, 2020, to be
Purple Heart Recipient Recognition Day
in Washington, and I urge all people in our state to join me in acknowledging and honoring this state's veterans who have been wounded in battle while defending the principles of democracy, individual freedom, and human rights. 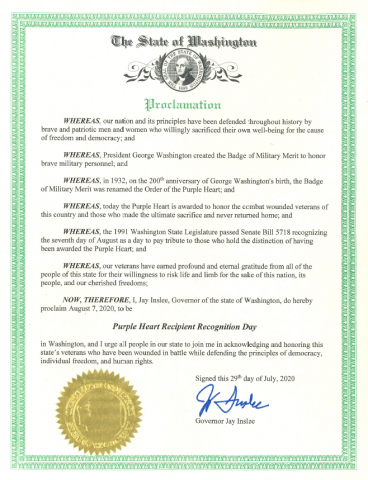