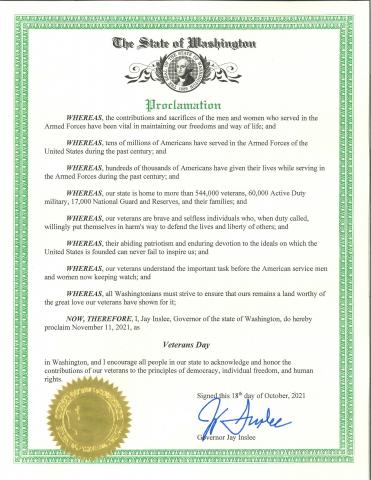 WHEREAS, the contributions and sacrifices of the men and women who served in the Armed Forces have been vital in maintaining our freedoms and way of life; and

WHEREAS, tens of millions of Americans have served in the Armed Forces of the United States during the past century; and

WHEREAS, hundreds of thousands of Americans have given their lives while serving in the Armed Forces during the past century; and

WHEREAS, our veterans are brave and selfless individuals who, when duty called, willingly put themselves in harm's way to defend the lives and liberty of others; and

WHEREAS, their abiding patriotism and enduring devotion to the ideals on which the United States is founded can never fail to inspire us; and

WHEREAS, our veterans understand the important task before the American service men and women now keeping watch; and

WHEREAS, all Washingtonians must strive to ensure that ours remains a land worthy of the great love our veterans have shown for it;

NOW, THEREFORE, I, Jay Inslee, Governor of the state of Washington, do hereby proclaim November 11 , 2021, as

in Washington, and I encourage all people in our state to acknowledge and honor the contributions of our veterans to the principles of democracy, individual freedom, and human
rights.