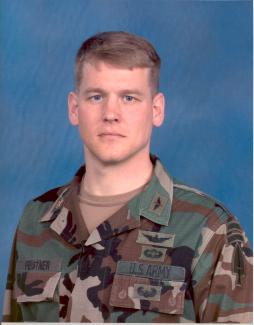 Arlene Feistner moved into her new home with a warm welcome from the Walla Walla Veterans Home team, who ensured that her name plate bore the Gold Star symbol on her door.

Born in Urbana, Illinois, Curt grew up in White Bear Lake, Minnesota and was an Eagle Scout.  He was commissioned a Second Lieutenant in Aviation upon graduation from the United States Military Academy in 1990 where he received a Bachelor of Science degree in Systems Engineering.

Until his death, Major Feistner served as an Army aviator in a variety of leadership positions for numerous worldwide operations while flying CH-47E Chinook and OH-6 Little Bird aircraft.

A talented athlete and outdoorsman, Curt was an avid parachutist who competed in demanding sporting events such as Hawaii's Iron Man triathlon. (More information about Curt is available at: https://www.west-point.org/users/usma1990/47210/)

Alan and Bruce, also Arlene sons, have been working together over the past few years to help keep Arlene at home; however, recently, the need for long term care became evident.  So the family reached out to the Walla Walla Veterans Home to begin the admissions process.

“I have had the pleasure of working with and getting to know both of Curtis’ older brothers, Alan & Bruce.  All three brothers have served our country in the military,” said Walla Walla Veterans Home Admissions Coordinator, Lori Ringering.  “When I asked them to tell me about their younger brother, they didn’t hesitate.  With tears in their eyes they talked about what a wonderful brother he was and how extremely proud they were of him.”

*In 2010, Congress modified the law to allow state veterans home to serve Gold Star Parents who had lost one child.  Previously the law required a Gold Star Parent to have lost all children.