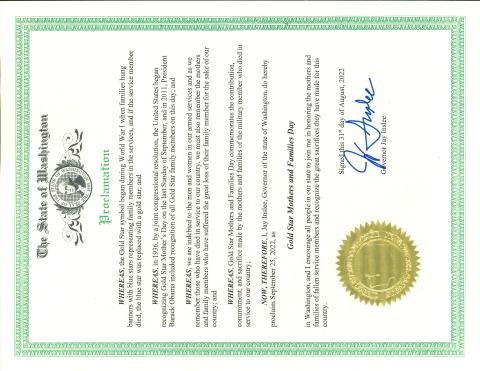 WHEREAS, the Gold Star symbol began during World War I when families hung banners with blue stars representing family members in the services, and if the service member died, the blue star was replaced with a gold star; and

WHEREAS, in 1936, by a joint congressional resolution, the United States began recognizing Gold Star Mother's Day on the last Sunday of September, and in 2011 , President Barack Obama included recognition of all Gold Star family members on this day; and

WHEREAS, we are indebted to the men and women in our armed services and as we remember those who have died in service to our country, we must also remember the mothers and family members who have suffered the great loss of their family member for the sake of our country; and

WHEREAS, Gold Star Mothers and Families Day commemorates the contribution, commitment, and sacrifice made by the mothers and families of the military member who died in service to our country;

NOW, THEREFORE, I, Jay Inslee, Governor of the state of Washington, do hereby proclaim September 25, 2022, as

in Washington, and I encourage all people in our state to join me in honoring the mothers and families of fallen service members and recognize the great sacrifices they have made for this country.