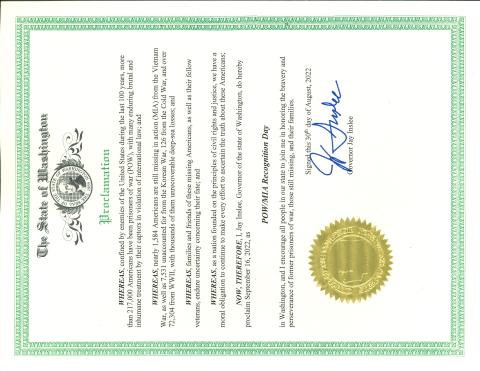 WHEREAS, confined by enemies of the United States during the last 100 years, more than 217,000 Americans have been prisoners of war (POW), with many enduring brutal and inhumane treatment by their captors in violation of international law; and

WHEREAS, nearly 1,584 Americans are still missing in action (MIA) from the Vietnam War, as well as 7,531 unaccounted for from the Korean War, 126 from the Cold War, and over 72,304 from WWII, with thousands of them unrecoverable deep-sea losses; and

WHEREAS, families and friends of these missing Americans, as well as their fellow veterans, endure uncertainty concerning their fate; and

WHEREAS, as a nation founded on the principles of civil rights and justice, we have a moral obligation to continue to make every effort to ascertain the truth about these Americans;

NOW, THEREFORE, I, Jay Inslee, Governor of the state of Washington, do hereby proclaim September 16, 2022, as

in Washington, and I encourage all people in our state to join me in honoring the bravery and
perseverance of former prisoners of war, those still missing, and their families.