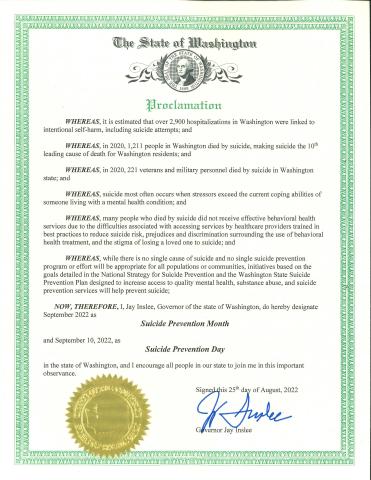 WHEREAS, it is estimated that over 2,900 hospitalizations in Washington were linked to intentional self-harm, including suicide attempts; and

WHEREAS, in 2020, 1,211 people in Washington died by suicide, making suicide the 10th leading cause of death for Washington residents; and

WHEREAS, in 2020, 221 veterans and military personnel died by suicide in Washington state; and

WHEREAS, suicide most often occurs when stressors exceed the current coping abilities of someone living with a mental health condition; and

WHEREAS, many people who died by suicide did not receive effective behavioral health services due to the difficulties associated with accessing services by healthcare providers trained in
best practices to reduce suicide risk, prejudices and discrimination surrounding the use of behavioral health treatment, and the stigma of losing a loved one to suicide; and

WHEREAS, while there is no single cause of suicide and no single suicide prevention program or effort will be appropriate for all populations or communities, initiatives based on the
goals detailed in the National Strategy for Suicide Prevention and the Washington State Suicide Prevention Plan designed to increase access to quality mental health, substance abuse, and suicide
prevention services will help prevent suicide;

NOW, THEREFORE, I, Jay Inslee, Governor of the state of Washington, do hereby designate September 2022 as
Suicide Prevention Month

in the state of Washington, and I encourage all people in our state to join me in this important observance.